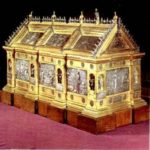 In the VIII century, it was by the blow of chance that Gerpinnes was marked by a famous event and the faith of age took care to perpetuate it.

Its name is illustrated in History and Tradition by the fine and touching legend of Holy Rolende.

If we refer to the oldest writings that have been found (Jean Gielemans(1427-1487) Under-Prior of the Convent of Red Cloister) and reported in 1900 by the RP Redemptoriste LEJEUNE in his work « Holy Rolende de Gerpinnes, according to Bollandistes », the history and the legend let appear :

In the year 711, our regions to the Mediterranean were under the domination of the Frank King, Charlemagne, who was due to become a few years later Emperor of Occident (800-814).

On the other side of the Alps, Didier, King of the Lombards was reigning on the Gaule Cisalpine.

In 774, the Franks were facing the Lombards. After a tough seat in Pavie (plain of Pô), Charlemagne came out victorious, thus he extended his domination to the Cisalpine areas. He condemned King Didier, his wife Ensa and their daughter to exile in the North of Gaule.

The king of Scotland’s son , Oger who had valiantly fought in the rows of the Lombards, underwent the same fate. The place of this exile is called in  » The Annals of Lobbes  »  » Pausatio Sancti Lantbertri « .

historians believe that it is « Liège ». Others think of Hainaut or the north of France. The exact site has not been specified to date.

On this ground of exile, Rolende realizing that her destiny was to marry Oger, but she did not share the burning wish of Oger and her parents, so she decided to flee.

Rolende wanted to devote her life to God, leaving her relatives to move towards Cologne where existed at that time the « Convent of the Eleven Thousand Virgins ».

On her way, reaching the parochial field of Gerpinnes, her forces abandonned her ; Rolende made a stop within the Farm – Castle of Villers-Poterie. Ill, exhausted of tiredness and deprivations, there she died in the year 774. At this place, it can be read inside the small chapel, engraved on a mural stone in Gothic letters of the XV century : 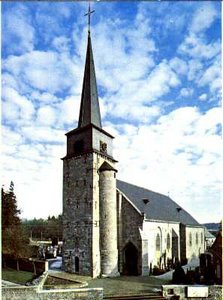