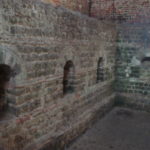 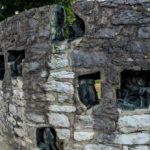 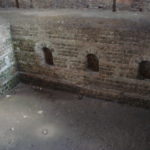 Gerpinnes, land for long disputed, located in the principality of Liège and the county of Namur, ended up remaining under the obedience of the counts. From the administartive point of view it was the concern of the bailiwick of Bouvignes and its subdivision, the town hall of Biesme-la-Colonoise. For the spiritual matters the parish of Gerpinnes was the concern of the bishopric of Liège. In 1559, it was attached to the bishopric of Namur. In 1872, at the locality ” Augette ” on the hill facing south , an important Roman villa of the IIIrd century was discovered (located not far from the confluence of the streams Augette and Saint-Pierre) : the villa of ” Aggrippa “, a roman notable. This villa had a frontage of more than 90 metres and was made of three central buildings facing the cardinal points. : west, the building of the junior personnel, south that of the masters and on the east side of the hypocaustes, the bathrooms and games. There was also a room in the basement (it can still be visited today) and was used as a cellar. The house of the masters was a combination of small rooms with walls on which the trace of paints could be seen (pink, yellow, red), with a front body furnished with columns of the Doric order and of a height of approximately 5 metres. The quality of the discoverd objects – colonnades, marbles, mosaics, paintings, potteries objects out of iron and glass – makes it possible to deduce that it was a rich owner who is at the origin of the name of the village.

At several places of the village different tombs of the Frank period were discovered.

The villa “Ojète” was twice burnt down, or even sacked. Anyway, after the Germanic invasions, the new owner, preferring a site more suitable for defence, abandonned the valley of Ojète to settle his residence on the height crowned today by the parish church.

The discovery of this villa is of such a value that the state decided to preserve the main part at the study of the scientists and far away from inquisitive glances. 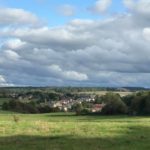 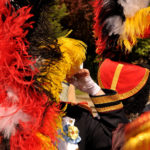 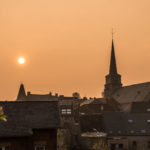 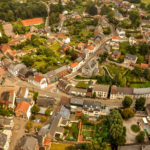